There has been increasing interest in Irish Clan Research as more fine-detailed Y-DNA data becomes available and the Irish branches of the Tree of Mankind have grown larger and sprouted more downstream branches. Soon we should be able to identify specific DNA signatures for particular Irish clans. This has already happened with the Uí Neill (O'Neill) in northwest Ireland and the Dál gCais (ancestors of Brian Boru) in Clare & Limerick. The discovery of the burial site of Red Hugh O'Donnell has also created a lot of media buzz (as discussed in a previous post). 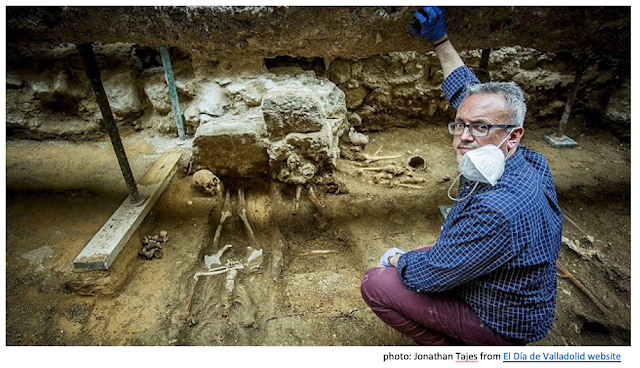 The usual test to start with is the Y-DNA-37 test from FTDNA. Only men can do this because women do not have a Y chromosome. So you will need to find the appropriate male relative to test. The more upscale test is the Big Y test and this tells us very specifically on which branch of the Tree of Mankind you sit. This is the most valuable test for Irish Clan Research.

So if you want to help further this type of research, find your surname project (just google: FTDNA & your surname), discuss testing options with the Project Admin (their email will be on the project's home page), and decide whether you want to start with the Y-DNA-37 or go straight for the Big Y test. The tests are frequently discounted in the many sales that occur throughout the year (the screenshot below is from the Christmas Sale 2020).

Here is a detailed step-by-step breakdown of the various options ...

Step 1. Have you done a Y-DNA test at FTDNA already? 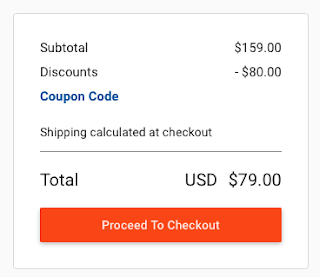 b) enter the code in the Coupon Code box that appears 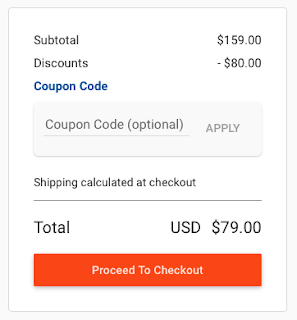 c) click on Apply and you will see the price drop ... then click on Proceed to Checkout 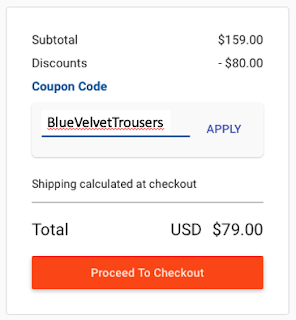 Step 2. Are you a member of the relevant Clan Project?

Step 3. Have you or one of your close relatives done the Big Y test? 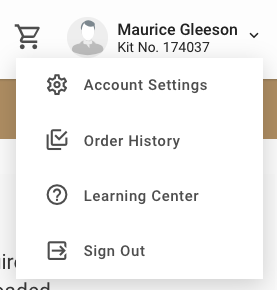 Step 5. Have you uploaded your Big Y data to the Y-DNA Warehouse?

If no, read below. If yes, you're good! You have optimised the value you will get from your Big Y test.

Remember, the volunteer Project Administrators are a great source of information, so never hesitate to drop them an email with any questions you may have.

With a bit of luck, you may find that you have a direct genetic connection to one of the major Irish Clans. 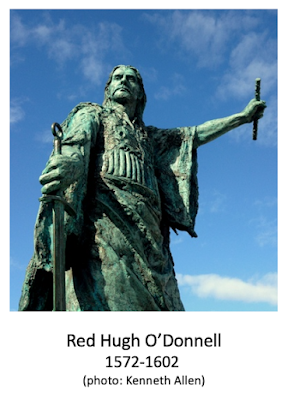 Posted by Maurice Gleeson at 11:37 No comments:

There have been major advances in recent years in the field of Ancient DNA. The science has evolved to the point where the DNA profile extracted from ancient bones can be linked directly to surname projects at FamilyTreeDNA. This is particularly relevant to Irish surname projects and is sparking a renewed interest in medieval Irish history and Irish Clan research. But what is the optimal way of connecting Ancient DNA to Citizen Science? Read on!
Y-DNA and Citizen Science
Y-DNA has been used for paternity testing and forensic cases since the 1980s but it was only with the advent of direct-to-consumer DNA testing by FamilyTreeDNA (FTDNA) in the early 2000s that saw Y-DNA being used in surname research (Y-DNA and surnames both follow the father's father's father's line). There are now over 10,000 group projects at FamilyTreeDNA, connecting people to their surname origins and in some cases a Clan history. You can find out if there is a project for your surname by simply googling: FTDNA & "your surname".
Many projects have now reached an advanced state of maturity and have helped characterise the number of distinct genetic groups associated with a particular surname, how old each genetic group is, where it came from geographically, and whether or not it is associated with a particular Clan (Irish or Scottish).

These projects are run by volunteer Administrators who help project members with their questions, collate & analyse the project data, and publish their results & conclusions. This is a great example of Citizen Science in action. The output from these projects has greatly accelerated the construction of the Tree of Mankind (Y-Haplotree) and the Tree of Womankind (mitochondrial Haplotree) to the extent that the ongoing construction of these trees has passed from the Academic Scientists to the Citizen Scientists.

This data is summarised in Tables 7 and 8 of the paper. 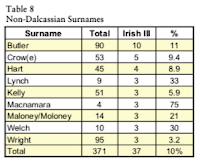 I put these values into the 2x2 contingency table that forms part of the chi-square calculator at https://www.socscistatistics.com/tests/chisquare/default2.aspx.

The contingency table below provides the following information: the observed cell totals, (the expected cell totals) and [the chi-square statistic for each cell].

The chi-square statistic, p-value and statement of significance appear beneath the table. Blue means you're dealing with dependent variables; red, independent.

The chi-square statistic with Yates correction is 14.4561. The p-value is .000143. Significant at p < .01. (There's probably a consensus now that the correction is over-cautious in its desire to avoid a type 1 error, but the statistic is there if you want to use it).

If we analyse only those Dalcassian surnames in bold in Table 7, we get the following results:

I also used another calculator on the website to do a Fisher Exact Test … https://www.socscistatistics.com/tests/fisher/default2.aspx

The Fisher exact test statistic and statement of significance appear beneath the table. Blue means you're dealing with dependent variables; red, independent.

If we analyse only those Dalcassian surnames in bold in Table 7, we get the following results:

Posted by Maurice Gleeson at 11:03 No comments:

When were surnames introduced to Ireland?

And that "but" represents the fact that different Irish surnames arose at different times, usually between 900 to 1350 AD, and mostly between 950-1150 AD, with the busiest period being 1000-1050 AD. Also, surnames with the prefix O or Ó were formed prior to 1200 AD and those that formed afterwards were mainly those with the prefix Mac. These are the top-line conclusions from the data analysis that follows.

Back in 1923, Woulfe claimed that "Irish surnames came into use gradually from about the middle of the 10th to the end of the 13th century". [1] But let's look at some of the hard evidence supporting this statement. I have gathered such data from two sources - the introduction to the 1923 edition of Woulfe's Irish Names and Surnames [1] and a more recent 1999 journal article by Ó Murchada. [2]

In his 1999 review article, Ó Murchada provides a table in the appendix with years of death for 78 progenitors of a selection of Irish surnames. [2] The complete list of 78 surnames is included in Footnote 1.

Ó Murchada suggests that the average surname would have come into use during the time of the progenitors' great-grandsons.

Using Corpus Genealogiarum Hiberniae as source, I extracted thirty genealogies which could be traced in the annals and dated for at least ten generations. This gave a total of 416 generations, which when divided into a total of 13,779 years, furnished an average generation gap of 33.2 years, i.e. the number of years between the death of a father and that of his son / successor ... By my calculations, adding sixty-six years to the date of death of the eponym will give an approximate date for the death of his grandson, and at any time subsequent to that, in his great-grandson’s era, one could expect the surname to have come into use ... (Ó Murchada p30)

Adding 66 years to the year of death of the progenitor to arrive at the approximate date of surname introduction seems like a reasonable approach. Woulfe takes a similar strategy by adding 60 years to the date when the progenitor flourished, died or was slain (see below). [1] This approach is supported by specific examples from the list of surnames.

Woulfe gives other examples of specific dates when several fixed surnames were first mentioned in the ancient texts, illustrating that inherited fixed patronymic surnames were well-established before the turn of the first millennium. [1]

This data also disproves the mistaken belief that surnames were introduced by Royal Decree during the reign of Brian Boru (1002-1014). In fact the O'Brien surname (which derived from Brian's name) did not become a fixed inherited surname until the time of his grandsons. [1]

Note that it was not uncommon for the same surname to arise in different places and hence the clan territory is frequently added after the surname as a qualifier. For example, we have the O'Donnell clan of Corca Bhaiscinn, another of the same name in Ui Maine, and a third in Tirconnell. And there was also the O'Conor clan of Connacht, another in Corcomruadh, and a third clan in Offaly.


A similar pattern is seen with the data extracted from Woulfe. [1] In the Introduction to the hard copy of his Irish Names and Surnames (page xvi), Woulfe lists 46 surnames that had previously been compiled by O'Donovan and extracted mainly from from the Annals of Ulster and the Annals of the Four Masters. The list (see Footnote 2 below) includes dates when the various progenitors flourished, died or were slain.

Woulfe states that the date when the surname became fixed "cannot have been more than 60 years from the period when the ancestor flourished or died". However, in an attempt to standardise the dates, I have added an additional 10 years to any dates when they "flourished" (to give an approximate date of death or manslaughter) and then added 60 years on top of this. This gives an average of 66 years between the death of the progenitor and the introduction of the surname ... which is the same interval employed by Ó Murchada above.


Combining the two datasets and removing any duplicates (or likely duplicates) produced 109 distinct surnames (see Excel spreadsheet here). The average year of introduction of surnames was 1068 AD (range 920-1350) but the busiest period for surname introduction was again 1000-1049 AD. The majority of surnames (84/109= 77%) were introduced in the period between 950-1150 AD.

The proportion of surnames introduced in successive centuries is as follows:

Interestingly, O surnames were introduced about 124 years earlier than Mac surnames (1032 vs 1155 AD for average dates of introduction). Woulfe states that the creation of surnames with the O or Ó prefix "had almost certainly ceased" prior to the Norman Invasion, and that surnames that arose thereafter were primarily of the Mac variety. This is almost true - in the combined dataset, only two O surnames arose after 1169 AD (the start of the Norman Conquest); one in 1170 (O'Shaughnessy) and another in 1193 (O'Growney) - see Excel spreadsheet here.


This data paints a very clear picture of the emergence of surnames in Ireland.


But from a genetic genealogy perspective, why is this important? Knowing when a particular Irish surname was first introduced will be of particular use to Surname Project Administrators as it identifies a maximum age for the genetic group that is presumed to be descended from that particular surname founder. This upper age limit can help constrain the date calculations for the various branches in this portion of the Tree of Mankind, including those branches below the overarching SNP for the surname in question, as well as the adjacent branches of different but genetically-related surnames.

However, the data presented above does not answer the questions: when did surnames in Ireland become commonplace? when were they adopted by the majority of the population?

And that is a topic for a subsequent article.
Maurice Gleeson
April 2020 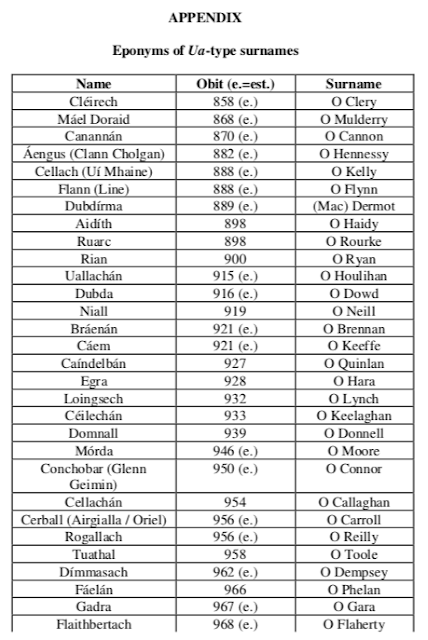 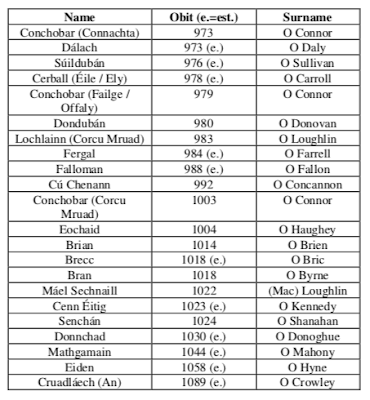 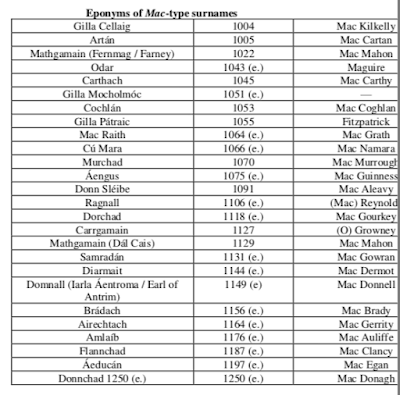 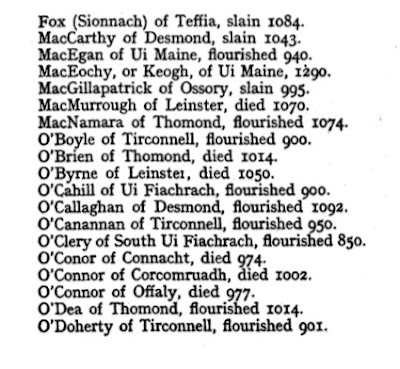 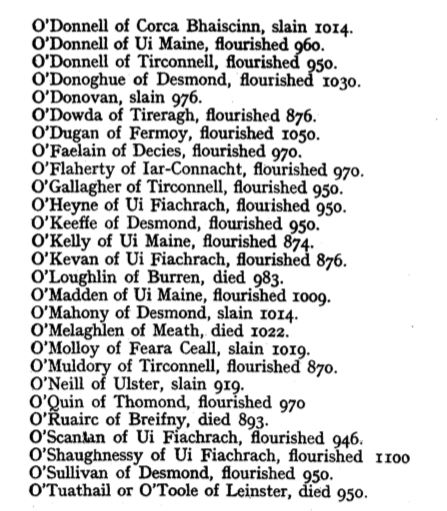