What are the most common mtDNA subclades in Ireland?

I have been co-administrator on the Ireland mtDNA Project for several years, along with project founder Katherine Borges. When I did this analysis (July 2019) there were over 2500 people in the project. That figure is now closer to 3000.

Project members are self-selected - in other words, they believe they have Irish ancestry on their direct female line (mother's mother's mother's line). This has certain important implications and limitations. Firstly, these results may be a truer reflection of the subclade prevalence among the Irish diaspora rather than the present-day population in Ireland itself. Secondly, biases due to founder effects among the diaspora population are likely to have introduced a certain amount of skew into these results. And as a consequence, these results are not likely to be a true reflection of the prevalence of these subclades in either modern Ireland or ancient Ireland (say 2000 years ago) ... but they may be close (more to the former than the latter). Furthermore, the sheer weight of numbers in this analysis is likely to minimise any "outliers" and reduce the influence of any biases (without removing them completely). In other words, this is probably close to what we would get with a Real World sample (if we were to take one).

The Eupedia website includes a simplified version of the mtDNA Haplotree (below). This can be considered to be the Tree of Womankind because mtDNA allows us to track back in time along the direct female line (mother, mother, mother, etc). More fine-detailed versions of the mtDNA haplotree are maintained on the FTDNA website and the phylotree.org website. And more detailed information about mitochondrial DNA can be found on Wikipedia and the ISOGG wiki.

I sorted the project data by major haplogroup and subclade, and then added up the numbers for each major subclade in an Excel spreadsheet. Below is the breakdown by major haplogroup. Haplogroup H is the most common of the haplogroups, accounting for 40% of the members in the project. A further 50% is fairly evenly distributed between 5 haplogroups - U 12%, T 10%, K 10%, J 10% and I 8%. The remaining 10% of participants belong to V (4%), W, X & HV (all 2%) with remainder being L (1%) and a small number from A, B, C, D, N & R. 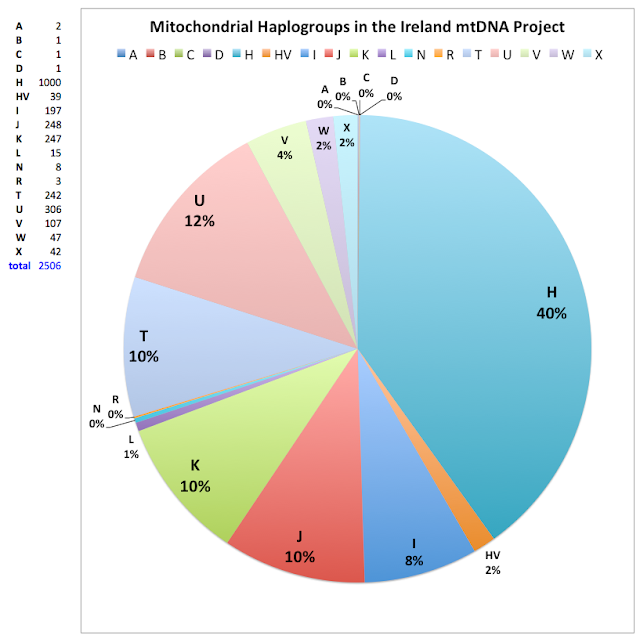 Haplogroup H is the largest group within the project. Here is a further breakdown by subgroup. 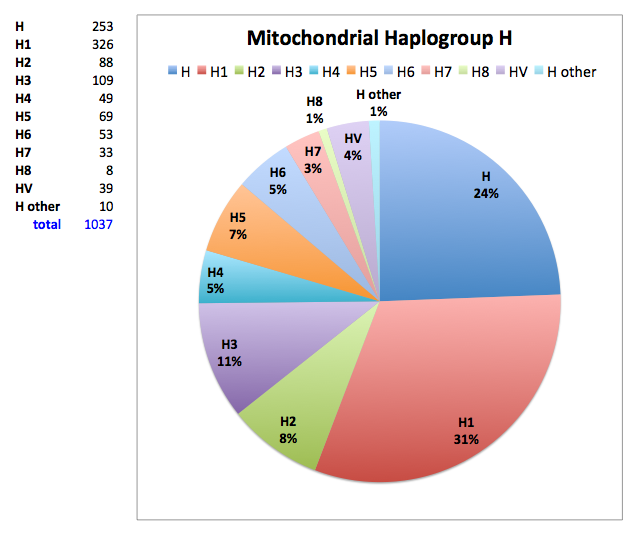 Maciamo Hay has compiled a frequency distribution of mtDNA haplogroups for Europe on the Eupedia website. This analysis appears to have been performed in late 2014 / early 2015. Here are the frequencies for the UK & Ireland (this is based on the list of sources at the end of this article).

In the Eupedia sample, the frequencies for Ireland are based on only 299 subjects (only about 12% of the size of our Ireland mtDNA sample from July 2019). The results are broadly similar to what we see in the Ireland mtDNA Project but of note I is only 3% (vs 8%), V is incorporated into HV0, and X is only 0.7% (vs 2%). Using the same categories as those on the Eupedia website, we get the following comparative table ...

The values for each category are broadly in agreement. Again, the only notable difference is for Haplogroup I - this is 7.9% of the total population in the Ireland mtDNA Project sample but accounts for only 3% of the total numbers in the Eupedia analysis.

Comparing the Irish results to those in England, Scotland & Wales, there is very little difference between the various countries, which is not surprising given the similar origins of the peoples of these islands, and the relatively slower rate of mutation of mitochondrial DNA compared to Y-DNA. The only notable differences are the slightly higher rate of K (10-12% vs 7-8%), and possibly U (0.3-0.5% vs up to 2.7%).

We can see how these proportions compare to the prevalence of mtDNA subclades in other European countries from additional Eupedia analyses. It is important to appreciate that when we look at modern day geographic distributions of the various haplogroups (and their subclades) that we are only looking at the survivors - it is likely that many subgroups died out over time or are very poorly represented in present-day populations.


The Eupedia website also includes an analysis of each of the individual haplogroups and their major subclades. Here are the analyses for the most common Irish haplogroups:

Taken with the results of mtDNA from ancient samples, mtDNA data from present-day populations continues to inform us about the migration of Woman out of Africa and how She populated the rest of the world. As more people undertake mtDNA testing and join the Ireland mtDNA Project (and similar projects), more data will be available on the more downstream subgroups, and a more granular, fine-detailed picture will begin to emerge of the migration of women from Europe and into Ireland (since the Last Ice Age receded some 12,000 years ago).