There are many people who don't know who one or both of their parents were, among them adoptees, foundlings, and donor-conceived children. For these people there is frequently a desire to track down their biological relatives and learn a little about their roots. Sometimes the person of unknown parentage is one of our parents or grandparents.

DNA has helped revolutionise our ability to trace birth families and this article describes how you can use it to help solve these kind of mysteries, identify birth parents, and connect with living relatives. This journey is an exciting one and an emotional rollercoaster so make sure you have your support network around you to help you each step of the way.

If you are the person of unknown parentage, you should put your autosomal DNA (atDNA) in all the major DNA databases currently available, in the hope that you will find your birth parents or one of their close relatives there. 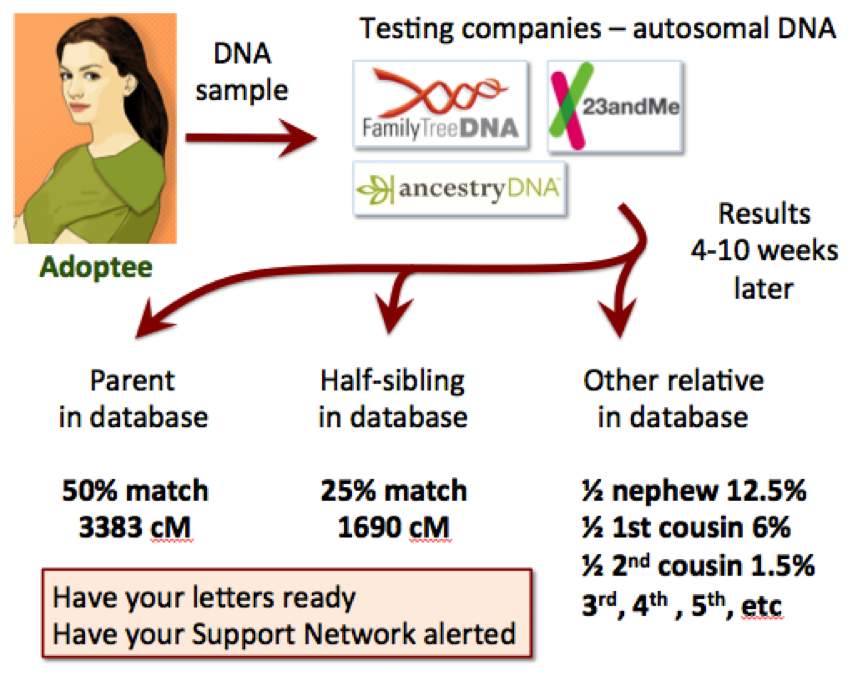 My favoured approach (March 2018) is to do your first test with Ancestry and once you have your results, you can download a copy of them to your computer and upload them to several other databases for free, namely:
Leah Larkin has written some great step-by-step instructions for doing this on her website here.
There is one other major company you could consider testing with (23andMe, 99 euro) but only if you don't get sufficient close matches in the other databases.

At a later stage, if you need to do confirmatory DNA testing on potential close family members, simply use whichever of the above tests is the cheapest at the time (the various companies have frequent sales where the price can drop to as low as $49).

If you are very lucky, your atDNA results will include a very close match and you will be reconnected with your birth family in a matter of days or weeks. My good friend Winnie had been searching for her family for 40 years. At 76 years old, she felt she was running out of time. But within days of getting her DNA results, she found the son of her half-sister in the database and was reconnected with four half-siblings she never knew existed. And they welcomed her into the family with open arms and warm hearts. What an incredibly precious gift. You can see Winnie’s story on YouTube. 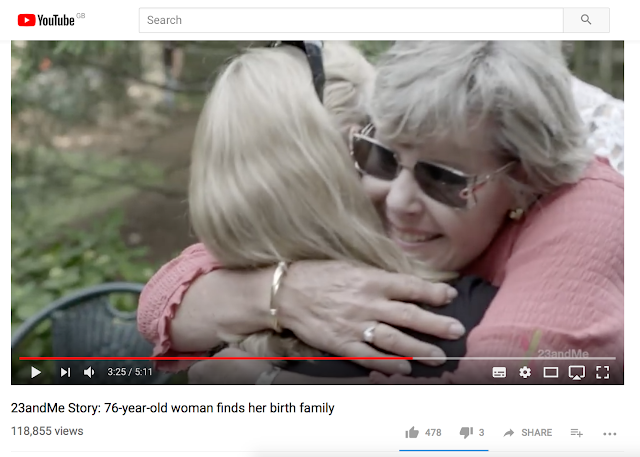 Most people don’t have such very close matches, although clearly it is possible. It’s more likely that your closest match will be a third cousin, or if you’re fortunate, a second cousin. Both of these scenarios are good news. What then follows is a sequence of steps to figuring out who is your common ancestor (or rather your common ancestral couple – because most of the time you will share an ancestral husband and wife in common).
Some people do this work on their own (because they want to, and have a good grasp of the technical aspects of the process). For those who need help, there are professional genetic genealogists who can provide assistance (some charge a fee), or there are volunteer genetic genealogists who can help free of charge - if you are interested in this option, check out the following groups on Facebook: DNA Detectives, Search Squad.
Here are the technical steps in the process.  Oftentimes, these steps are done in parallel rather than in sequence:

1. Starting with your closest match(es), get hold of their family tree. Sometimes this is already available because they have shared it publicly online, but sometimes you have to ask them for it nicely. And that means engaging them in a conversation initially and developing a trusting relationship with them over time (and by “over time” I usually mean weeks if not months). If they are a predicted second cousin, for example, then your predicted connection is somewhere at the level of their great grandparents, of which there are 4 pairs. One of these pairs will be your great grandparents too … but which pair?

2.  Find other people who match you both. The chances are that these “Shared Matches” or “In Common With” matches are also descended from the same common ancestral couple (but beware of double-cousin connections – they can throw a spanner in the works). Get hold of their family trees and figure out how they are connected to your closest match. This exercise will hopefully identify a single common ancestral couple. If you are lucky, your closest match will also have other family members who have tested and who match you, and this will narrow down the connection to a single ancestral couple in their family tree.

3. Use the data from the Shared cM Project to help you create a draft family tree of how you are connected to the matches above. Be aware that this is merely a “most likely scenario” and the connection may be a generation higher than you have predicted (or even two). Keep it “Private” for now (i.e. not publicly visible) because it is largely experimental. This process involves building "mirror trees" i.e. you copy across potential relatives and ancestors from the trees of your closest matches. There are lots of tutorials online on how to do this (google them).

5. There are several tricks you can use to identify the most likely candidate for your biological parent:


a. If you have already identified your mother, then you know you are looking for your father and therefore you only need to identify family lines that have males of the right age to be your father

b. Look at locations. If you know where your conception is likely to have occurred, then there may be only one person from the list of descendants who was in “the right place at the right time”

d. There may also be clues from your mitochondrial DNA results and from your X-DNA results (which requires understanding the technicalities of DNA transmission)

e. Actively search for your “other grandparent”. Up until now, you have identified every descendant of a specific ancestral couple. And this process may have resulted in you identifying, say, three candidates for, say, your biological father. All three candidates will have one parent that belongs to the same family tree (i.e. all descended from the specific common ancestral couple you have previously identified). But they will also have “another parent” that has “married in” to the family in question. And each of those three “other parents” will have a completely different family tree attached to them. The trick is: can you find evidence among your other atDNA matches as to which of these three “other families” you are genetically connected to? And that means building these spouse’s trees back as well, back into the 1700s preferably. There is an extra trick if you have tested with Ancestry - you can “attach” yourself as a child to each “candidate parent” in turn. Once you hit the right one, you should see many more “DNA leafy hints” appear (on both grandparental lines) indicating that you may have found the correct “candidate parent”. It may take 24 hours for new DNA leafy hints to appear so best to attach yourself to only one “candidate” per day.


6. Armed with a theory, supported by the evidence, you approach your theoretical cousins and ask them to do a DNA test. Start with the more distant cousins and gradually work your way in towards your half-siblings. If they test positive, and support your theory, then you go for the next closest cousin and get them to test. This takes months. Finally, you bite the bullet, and approach your theoretical half-siblings and ask them to test. You can imagine how delicate this last step can be. You may benefit greatly from using an intermediary, particularly someone with professional training in reconnecting adoptees with their birth families. You usually only get one shot at this. Hence the recommendation to test the more distant cousins first – it helps you fine-tune your diplomacy, negotiation and persuading skills.

7.  Take time to enjoy your new family. Make time to get to know them. Develop a concrete plan for a long term relationship with them. Don’t let it slide. This takes work.

8. Once you have identified one biological parent, you can start on the search for the other. I would often recommend waiting for at least one year before undertaking this second journey. FamilyTreeDNA have a wonderful “buckets” feature that allows you to divide your matches into Paternal and Maternal. This is helpful for eliminating those matches that are not on the side of the family of interest, thus helping you focus your attention on matches that are more likely to be connected to you via your other parent, the focus of your second journey.

That in a nutshell is the process I use. Others will have slightly different approaches or may have other hints and tips that may speed up the process.

There are a few things I have learnt through this work: the family trees on Ancestry are indispensible; so too is the ability to build trees from scratch using the records on Ancestry; first cousins are more reticent to get involved (they are too close to the supposed half-siblings in question) so it may be necessary for the adoptee to go directly to their half-siblings and “come clean”; expect surprises – they happen often, and can be emotionally overwhelming; the circumstances of the conception can be different to that expected; all adoptions are traumatic – it is never easy for a parent to give up her child; sometimes the family concerned refuses contact; sometimes the family concerned can be more helpful and more welcoming than expected.

All in all, this work is often very gratifying for all concerned and a wonderful application of genetic genealogy.