This year was the last year of Who Do You Think You Are? - Live! The event was an annual staple of the British genealogical calendar for the last 10 years. Starting in 2008 in Olympia in London, it moved to the National Exhibition Centre in Birmingham in 2014. The event attracted thousands of attendees year on year, and in 2009 Brian Swann, ISOGG-UK representative, persuaded FamilyTreeDNA to sponsor a stand at the event.

Shortly thereafter, the DNA Workshop began. And for the past several years this has been kindly sponsored by FamilyTreeDNA and run by volunteers from ISOGG. Each year the lecture schedule has attracted a host of international and local speakers, both academics and citizen scientists. And in addition, videos of the presentations have been made available free of charge on our dedicated YouTube channel as a service to the genetic genealogy community. 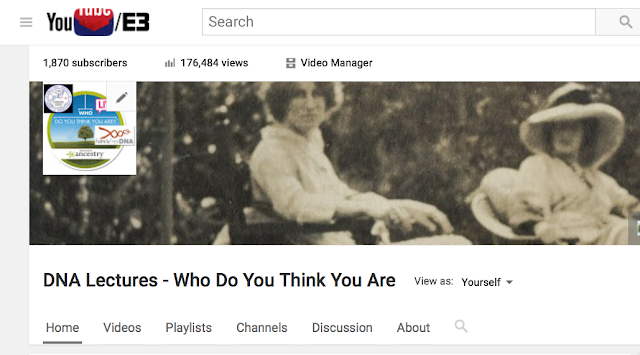 It is sad to see the demise of the WDYTYA event. It was a wonderful way of keeping in touch with friends and colleagues, and everyone looked forward to the manic three days of early mornings and late nights. Hopefully another annual event will rise to take its place. Nevertheless, at least the videos of the presentations will serve as a lasting legacy of the ten year run of WDYTYA.

The last batch of videos ever are ready to be uploaded to the YouTube channel and this will happen every Monday and Thursday over the coming 6 weeks or so. Three videos have already been uploaded and are attracting a large audience:

The schedule of lectures from this year's event are indicated below (click the image to enlarge). Most of the presenters gave permission to upload their lectures and big thank you is due to the speakers for their generosity.

And this year we managed to get better audio recordings than ever before. Who would have thought that dangling a small microphone in front of the loudspeaker and recording a separate audio track on your iPhone would be the best way of conquering the ever-present background noise from the 10,000 people in the auditorium?!

Posted by Maurice Gleeson at 16:15